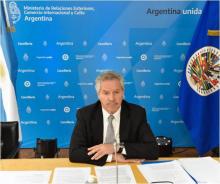 The General Assembly of the Organization of American States (OAS) adopted today by acclamation the Declaration on the Question of the Malvinas Islands, reaffirming, once again, the need for the Governments of Argentina and the United Kingdom of Great Britain and Ireland to del Norte resume, as soon as possible, the negotiations on the sovereignty dispute, in order to find a peaceful solution to this protracted controversy.

The declaration approved during the 50th General Assembly of the OAS, renews the region's constant support for the Malvinas Question and reiterates that it will resolve the sovereignty dispute between the two countries over the Malvinas, South Georgia and South Sandwich Islands and the maritime areas surrounding areas continues to be a topic of permanent hemispheric interest.

In this context, Foreign Minister Felipe Solá thanked “the countries of the hemisphere for their continued solidarity” and reiterated that “the recovery of the full exercise of sovereignty over the Malvinas, South Georgia and South Sandwich Islands and the surrounding maritime spaces, respecting the way of life of its inhabitants and in accordance with international law, is a permanent and inalienable objective that is enshrined in the National Constitution and constitutes a State Policy”.

The Secretary for the Malvinas, Antarctica and South Atlantic of the Ministry of Foreign Affairs, Daniel Filmus, stressed that "the support on the Malvinas issue adopted by the OAS is a clear example that it is a regional cause, not only of Argentina" and remarked that this year "our country achieved a historic advance to consolidate sovereignty over the islands after the National Congress unanimously approved the law, promoted by President Alberto Fernández, creating the National Council for Malvinas Affairs, an instance plural that will have the objective of drawing up and sustaining State policies in the medium and long term ”.

During the discussion of the issue, numerous countries intervened reaffirming their support for the resumption of negotiations between the two states, Argentina and the United Kingdom, to resolve the sovereignty dispute. Among them, the representatives of Peru, Brazil, Chile, El Salvador, Guatemala, Panama, Nicaragua, Costa Rica, the Dominican Republic, Suriname and Uruguay spoke. Likewise, during its intervention, the Paraguayan delegation conveyed the support expressed by the Heads of State of MERCOSUR and Associated States in their 2019 and 2020 meetings. Ecuador referred to the commitment expressed by the Group of 77 and China during the last meeting of Ministers of Foreign Relations. Mexico reiterated the support of CELAC, expressed in the recent adoption of the Special Declaration of the Community, and Nicaragua transmitted the support of the Central American Integration System (SICA).

Chancellor Solá was also accompanied by the Secretary of Foreign Relations, Pablo Tettamanti, and the Chief of Staff of the Chancellery, Guillermo Justo Chaves.